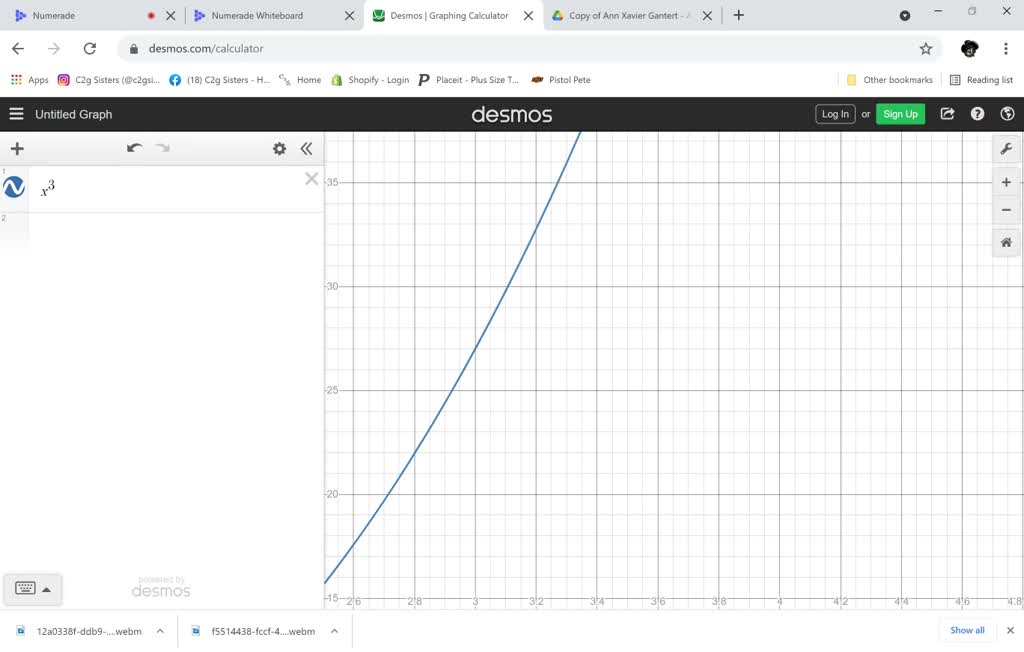 So in this problem were given if is X cubed were asked first to find by graphing X cubed the derivatives at 01, half 12 and three for this graph then we're asked to determine by symmetry The values of f prime at -1, half F. Prime at -1. If prime at -2 And F. Prime at -3. Okay, once we do that then we are asked to determine a um So you were asked to graph that the graph of prime and they were asked to um to guess a formula for F prime for the derivative of of F. And then we're asked to use the definition of the derivative to prove that. That is correct. Okay, so first of all, if we graph X cubed this is the graph of X cubed. Um and if we look at the derivative at zero, we're looking at the slope of this curve When X is zero. So if I zoom in here, that slope that is horizontal, so that slope is zero. Okay, what about at a half? Well, let's see half is right here, isn't it? Okay, half is right here. Well, that slope, yeah. Mhm Looks to be about what? Well, I would say that is roughly 0.75 going through there because if I did the slope of that curve right there, that tangent line through there. Ok, I was able to hone in a little bit closer on it. What would I see? Well that's positive .5 4321, that's .1 there, summit A little bit about .1 there and barely above point uh 15 almost there. And that's over .4 right, So that's about .75 going through there. All right, So this is 0.75. What about at one? Well, let's zoom back up for a minute. Get over here too when we get to one. Okay, we can kind of see pretty easily that one. Okay, What is this slope? Well, for .01 I went up 1/2, it looks like And for -11 I went down maybe a half. So those That means this slope is zero I'm sorry, the slope is two. Okay, what about at 2? Well, let's see here, bring this in two. It's a little bit steeper, isn't it? So what to hear? Right, I can zoom in and see that at two. Okay, well if I come off a tent, I'm over here at almost Um to 10 or 2 1000s. And if I go up a tent, I'm almost at 21 hundreds. So that ends up being slope of eight. And then at three I'll see what I have for three over here, get three and X equals three on the board here. Okay. And x equals three is still even steeper, isn't it? Because this is coming off by one And a two Uh huh. The Y value the output is coming down by one. The X came off by about five. One hundred's roughly same thing on the other side went up by one And we gained about five, 100 or so. And so this slope begins to look like 18. All right. So then by symmetry I know that this is gonna be negative .75. Actually not negative. It would be 0.75 on the other side. That will be too, This will be eight. This will be 10. Because when I look at the graph over here, okay, go in the other direction. Right. As much as this graph climbed when we were doing positive excess, it falls when we're doing negative excess. So you have negative or negative which is going to be positive by the same amount. So we end up with those derivatives. So then we could graph this. Put a table in here, put in zero one half, one, two, three, zero 10 1/2. We had .75 0.75, then we had two and we had eight and we had 18 here. Okay. Thus did we have we had minus a half honest one minus two, three and point some five there to their eight here and 18 there. Hey, so this looks like a parable. It isn't it? When I draw my line through those data points it looks like a parable and that's a pretty wide one as well. And it looks to me like that the derivative is probably three X squared. Okay, so how does that compare? Well, have we been a little bit closer? Um these three values, we have done a little bit better analysis here then we would have gotten what for these three? Well, one squared is one times two times three is three and two squared is four times three is 12 and three squared is nine times three is 27. So it got a little bit closer analysis, we would have been right on and these would have been the same values as well. So there we go.

Use the given graph to est…