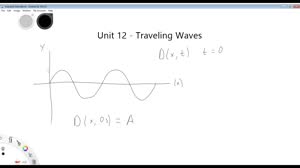 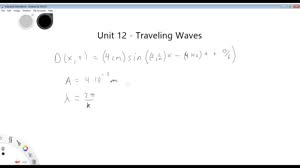 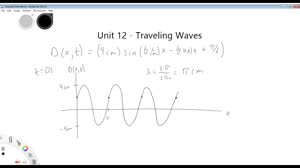 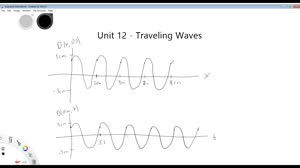 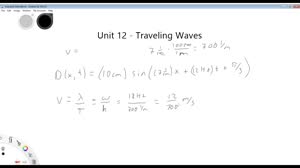 two, Unit 12, where we will discuss traveling waves. A traveling wave is well, Think of an ocean wave. You normally you could have a calm surface of your water. But when you have a notion, way of what you see instead is layered on top of this, something that looks kind of like this. Okay, Or better yet, if we consider a single wave that's going through, it will start here. And then some time later, it will be here and continuing to move forward, just as how these waves would continue to move forward and periodically replacing each other's position. So, um, what is a traveling wave? A traveling wave is essentially a way to transfer energy from one place to another. Okay, so we cause a disturbance. For example, if we have a rope, we cause a disturbance by shaking one side up or down, and that puts a wave into it, which then travels to the other side. And this wave is essentially saying I was given energy, and now I'm going to bring it over here through this medium. That is the rope. Okay, so Ah, a couple of important points here are the that we have the wave, so we're gonna have things like we need to know stuff about the size of the wave. We want to know how fast it's going. If we're having repeated set of waves, it would be helpful to know the period or frequency. So let's raise some of this down. We have an amplitude. We have a period, we have a speed, and then we also have a medium. We'll notice here, except for speed amplitude, period in medium. These were all things that mattered in unit 11 on oscillations there. What defined our system? The system, the mass on the spring or the pendulum was the medium through which the wave traveled. And then we had an amplitude in period. So it turns out that the mathematics of oscillations is going to be very, very helpful. As we consider traveling waves, we're just going to have to add a little bit to it in order to also understand the spatial component here. So, generally speaking, there's two types of waves that we will consider a wave that's called a trans verse wave, where we have a displacement that is perpendicular to the direction the wave is traveling. So you see, we have a displacement up or down, but the wave is traveling through our rope or string here in a perpendicular direction. So this is a very common type of wave is when you've probably seen before. It's also what water waves are made of. And again we see that the mathematics of oscillations work because if we have a periodic wave coming through here where we see one, if we consider one individual piece of rope, it's going to go down and then it's going to go up and then it's going to go down and then it's going on. If we were to plot the displacement of that piece, we would see Okay, well, it's going to go down and then it goes up and then it goes down and then it goes up. We see that we're actually going to get an oscillation sort of behavior for an individual piece of little individual section of rope. So, um, it's definitely going. Thio involve a lot of oscillations here, though not exactly the same thing as oscillations. We also have things called pressure waves, where pressure wave is best visualized. If we have a medium where every periodically we have a point that says I am a particular position When a pressure wave comes through, what it does is it pushes some points together and then it pulls other points of part. So this is called the Longitudinal Wave. So we have trans verse, which is like a wave traveling down a string or a wave in the ocean and longitudinal, which is like a pressure wave or a sound wave, Um, where the pressure in a particular position is going to be different because it's being constantly squished and pulled apart and squished and pulled apart. So these are the two types that waves that will look at here and again. As I said, we're going to use the mathematics of oscillations to begin analyzing these.