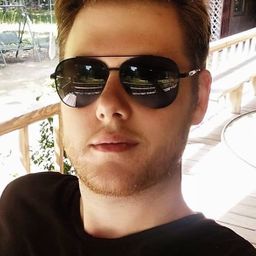 All right, So we're gonna be multiplying. Six m plus five. I'm 6 a.m. minus five. We're gonna be looking at this in three different ways. So the first way is to just use the law of distribution. So if I have something in parentheses and I want to multiply that by something else, how does it work? I multiply everything inside the parentheses by a So that's saying that we're distributing a over the parentheses. So that's what we're gonna do here. And we're gonna use this piece and think of that like the A. Okay, so we've got up here, becomes 6 a.m. Times six in last five plus five time six him minus five. And then we're just gonna distribute two more times. One for here and one for here. So six m times six him. That's 36 a. M. Squared six M times minus five. It's minus 30 a. M. We've got five times six him. That's plus 30 a m. And finally five times negative five. And it's 25. So we see here. We've got minus 30 a. M and plus 30 am So those cancel we're left with 36 m squared minus 25. Okay, so that's the first way we're gonna look at it. But you might be familiar with the technique called Foyle. All right, But it's the same thing. So we're gonna see how that works out to be the same. So I've got my problem here. Now, if oil stands for first outer, inner and last, okay. And this corresponds to multiplying. Uh, these described terms inside the parentheses. So for the 1st 1 we're gonna multiply the 1st 2 terms in each person to see someone used the colors to point that out. So first, we've got 67 times, 6 a.m. That's 36 m squared. And for the outer, I've got six M times minus five. So that's minus 30 a. M for the inner. I've got five times six him. So that's plus 30 a m. And then for the last, I got five times negative. Five negative 25. And you can see that this is exactly what we had before. Using distributions the negative 30 a. M and plus 30 and cancel out. And we're left with 36 m squared, minus 25. The last thing I want to look at is the particular structure that this one comes in. Okay, I've got 6 a.m. plus five six in minus five. Uh, I've got the same things in each parentheses. The only difference is the plus or minus. Okay, So our problem has the structure a plus B a minus B. And if I use foil or distribution Either way, I'm gonna get the same thing. I get a squared plus B a minus p a by his b squared. We know the middle terms are going to go away, and we end up with a squared minus B squared. So that's how that works out every time in the structure. So if I've got six in plus five, 6 a.m. minus five, then A for our purposes is six. M and B is five. I got six m squared, five squared, and that is 36 a. M squared. Minus 25. Yes, this three different ways to think about this one

Alan M.
The University of Alabama