The velocity graph of a car accelerating from res…

The velocity graph of a car accelerating from rest to a speed of 120 km/h over a period of 30 seconds is shown. Estimate the distance traveled during this period.

Use this model with six subintervals and their midpoints to estimate the total amount of infection needed to develop symptoms of measles.

The table shows the number of people per day who died from SARS in Singapore at two-week intervals beginning on March 1, 2003.

(a) By using an argument similar to that in Example 4, estimate the number of people who died of SARS in Singapore between March 1 and May 24, 2003, using both left endpoints and right endpoints.

(b) How would you interpret the number of SARS deaths as an area under a curve?

Use Definition 2 to find an expression for the area under the graph of $ f $ as a limit. Do not evaluate the limit.

Use Definition 2 to find an expression for the area under the graph of $ f $ as a limit. Do not evaluate the limit.

The velocity graph of a braking car is shown. Use it to estimate the distance traveled by the car while the brakes are applied.

Approximate distance traveled by the car is 155 ft 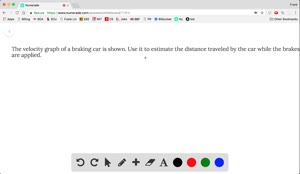 okay. We know the area of Los de Graff and above the axis of time or tea is equivalent to the distance traveled. In this context, acts would be equivalent to 61 sirrah if I'd buy sex, which is one. Therefore, we now have one times 55 plus 40 plus 28 hours adding up all the individual areas. This is 155 feet.